So, by the time I finished Grasshopper Jungle I was like:

Which I believe is the only correct response to this book. How do I know this? Because when I Google Image Searched for this meme I found it on Writer For Wrongs review of the same book.It also shows up in pretty much every review of this book. 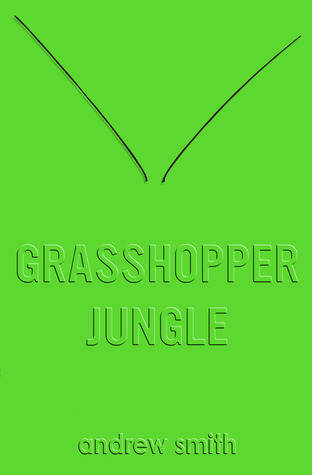 We on Books and Sensibility occasionally use tropes when we review books and if I had to pick some out for Grasshopper Jungle they’d include And I Must Scream, Nightmare Fuel, High Octane Nightmare Fuel, Fridge Horrorwith a sprinkle of Nausea Fuel

Seriously, bring on the brain bleach. Every time I dove back into this I was like, well it can’t get any worse and then Andrew Smith proved me wrong.

All that said…you can’t deny Andrew Smith is an excellent writer and is doing something very unique with the YA genre. His writing is probably some of the best I’ve read this year.

If you know this book, then you know the basic plot and it’s very WYSIWG

Grasshopper Jungle centers around two major conflicts in 17-year-old Austin Szerba’s life; he’s in love with his gay best friend. And man-eating bugs the size of refrigerators are infesting his small Iowa town. There are also a few themes about identity and heritage that I liked, but I think the first two are all you need to know.

Despite the squick, I actually really liked this novel. Once I finished I couldn’t stop thinking about it, I think it’s because of how well Smith built Austin’s town of Ealing, Iowa and the characters around it. I feel like I know the characters and how to act if I was dropped in this fictional Iowa. I mean look, these characters aren’t in anyway likeable, they are extremely flawed and I think that’s what makes them feel so real. You get the sense there is a lot of despair and pent-up frustration in this town. That said the female characters do leave a lot to be desired, they were like cardboard and maybe that has to do with or narrators’ perspective, but it was annoying that they didn’t seem to have any agency or personality.

In a lot of reviews, Smith’s style is often described as being Kurt Vonnegut-esque and I totally got that while reading Grasshopper Jungle. I haven’t read a whole lot of Vonnegut, but the narration has this repetitive, rhythmic language like Slaughterhouse-5 and the weird science fiction elements I think Vonnegut is known for. I really loved how this novel was written. From page one you know you are reading a history so Austin will occasionally switch to what other people were doing while he was doing something and it turns the first-person narration into a kind of third-person with an opinion.

However, if anyone asked me, I would be very cautious in suggesting this novel. I’m laughing at myself because I called Charm & Strange explicit, but it has nothing on this book. Smith examines the ugly side of life, this book has its gritty moments, so I don’t think that’s going to be everyone’s cup of tea. And while there is a fair amount of stuff related to sex in here, I wouldn’t call it titillating or super inappropriate or anything. The narrator tends to be kind of antiseptic about it.

Although I guess graphic content is just Smith’s thing. As I was on Goodreads, I realized Andrew Smith is also the author of The Maybury Lens, a book I was going to read but had been warned it was graphic. That all said, I’ll be darned if Smith’s next book, 100 Sideways Miles, about a boy who thinks he’s a character in his Dad’s cult classic novel sounds good (although the cover freaks me out).

Okay, off to find a coming of age contemporary romance to cleanse my brain!

1. The book was cool, but youcouldn’t pay me enough to see this movie.

2. The only thing better than reading this book is reading people’s reactions to this book.