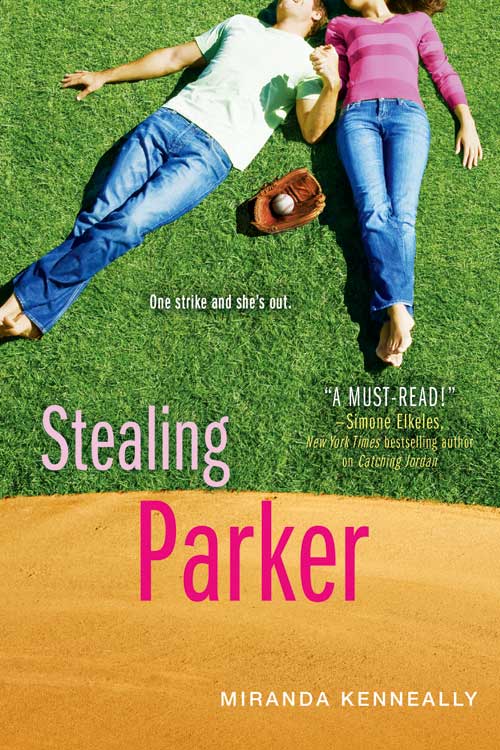 Synopsis: Parker Shelton pretty much has the perfect life. She’s on her way to becoming valedictorian at Hundred Oaks High, she’s made the all-star softball team, and she has plenty of friends. Then her mother’s scandal rocks their small town and suddenly no one will talk to her.Now Parker wants a new life.So she quits softball. Drops twenty pounds. And she figures why kiss one guy when she can kiss three? Or four. Why limit herself to high school boys when the majorly cute new baseball coach seems especially flirty?But how far is too far before she loses herself completely.

Parker Shelton was always a good Christian girl.With good Christian friends and a clean reputation. That is until her mother comes out as a lesbian and runs away with the church’s secretary. Like the tagline says, one strike– to her facade of a perfect life that is– and she’s out. Parker loses her grip on who she is, to become the person she believes everyone needs her to be.

Parker is your average self-conscious snarky teenager. She is so concerned with what everyone thinks and things never seem to turn out the way they should for her. She loses weight, stops playing softball and starts making out with more boys just to confirm to everyone she is not a lesbian like her mom.

One of the characters that stood out to me was Brian Hoffman, the 23-year-old baseball coach she starts a secret relationship with while she is managing the baseball  team. He was supposed to be a baseball player, but he wasn’t a good enough  in college. He has a Master’s degree, but is back at home living with his parents because he can’t afford to move out. I think this speaks so much to what is going on with a lot of 20 somethings. When you learn all the high school dreams you had don’t always come true. I mean he is a jerk a lot of the time, but I think that comes from the frustration with where he ended up. This tension plays up especially well with him risking losing his job to see Parker.

For a book about gay people and religion, I will say this book doesn’t delve to deep into the issue. I think Kenneally handles it well, but it’s not raw or uncensored. Most of what happens with Parker’s church clashing with her mom’s decision to leave is told to us, not shown.  In fact, the Church in this novel is less about the religion and more about the institution of religion. In Parker’s mind church means:

“… dressing up on Sunday mornings and forgoing french toast at the kitchen table for stale powdered donuts. It means listening to Brother John saying “your body is a temple” and “true love waits.” *

The only thing that really bothers me about this book personally are all the pop culture references  I mean, I liked some of them, like how Parker’s friends Corndog and Drew like to go to a diner and pretend like they are on Seinfeld and talk about nothing. However more contemporary  references to things like Mila Kunis, Far East Movement  always take me out of books for some reason.

Stealing Parker is a modern, heartfelt follow up to Catching Jordan about learning to love again.

Side Note : Miranda Kenneally has received a three book deal with Sourcebooks Fire. Next up is a novel entitled Racing Savannah. A secondary character from Stealing Parker will feature in the novel.

* All quotes are from ARCs and may not reflect the finished copy. ARC received from BEA for review. Thanks to the publicist at Sourcbooks for findng a copy !