“You’ve been captive for so long that you don’t even realize you want freedom anymore.” 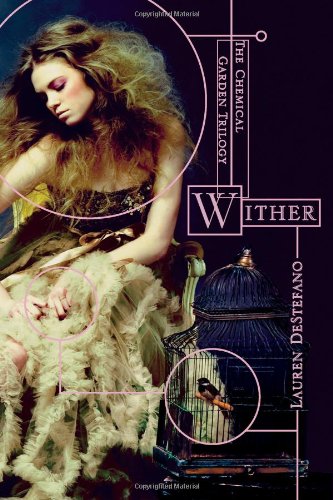 Synopsis :  Genetic mutations have festered, reducing human longevity to twenty-five, even less for most women. To prevent extinction, young girls are kidnapped, mated in polygamous marriages with [Rich] men eager to procreate. Sixteen-year-old Rhine Ellery, a recent victim of this breeding farm mentality, has vowed to break loose from its fetters

Wither is the taboo, energized and tumultuous story of three girls kidnapped and forced into marriage to the young Governor Linden.

The novel reads like a brand of feminist speculative fiction. Girls under the age of 20, are kidnapped and forced into marriage by rich families so they can bear children that rich people will use in hopes of finding a cure for a fatal disease that claims those under 25.

When Rhine Ellery becomes one of these unwilling brides she refuses to live her short life imprisoned and is determined to find a way out.

Reading this novel was like watching a particularly squicky episode of Law and Order SVU or Criminal Minds. It’s so unrealistically disturbing on the surface, but you just can’t look away.

On the flips side, I had a hard time believing the society created in Wither.  I just don’t think the novel  gives a good case for why a society would allow rich people to capture these girls, I mean no one even considers it a crime nor is there any “resistance force.” And why do they have to go through the pomp and circumstance of marriage if all they want them to do is procreate? Can’t they just steal their eggs?

I have a feeling a lot of my questions about this novel will be answered in the sequel, Fever, however, I also think this could also pass as a stand-alone novel. I’m concerned about how this can be shaped across 3 books.

This novel features complex characters, twisted romance, and dark tendencies which is enough to make it enjoyable, but it lacks the world-building needed to make the plot believable. I give it four stars in hopes my world-building questions will be answered in Fever.