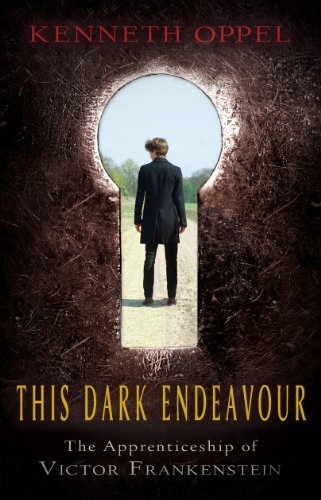 Synopsis: Victor and Konrad are the twin brothers Frankenstein. They are nearly inseparable. Growing up, their lives are filled with imaginary adventures… until the day their adventures turn all too real. They stumble upon The Dark Library, and secret books of alchemy and ancient remedies are discovered. Father forbids that they ever enter the room again, but this only peaks Victor’s curiosity more. When Konrad falls gravely ill, Victor is not be satisfied with the various doctors his parents have called in to help. He is drawn back to The Dark Library where he uncovers an ancient formula for the Elixir of Life. Elizabeth, Henry, and Victor immediately set out to find assistance in a man who was once known for his alchemical works to help create the formula

This Dark Endeavor is a man before the myth story of the boy who will become famous for creating the most notorious monster of all time.

I went into this audiobook with only a fleeting knowledge of the novel Frankenstein  written by Mary Shelley. While you don’t have to read the classic novel to understand this book it may help you make some connections.

16-year-old Victor Frankenstein and his twin brother, Konrad  lead a life of privilege in their father’s estate in Geneva. But when Konrad falls ill, Victor finds himself on a dark journey to save his brother using forbidden methods he doesn’t fully understand. To me this book can be best described as steampunk meets alchemy meets Downton Abbey. Which seems totally weird, but in this book it works.

I was recommended this audiobook by Reading Teen andEmily’s Reading Room during a Twitter chat  and  it is just perfect. The narrator, Luke Daniels is brilliant at what he does. There is a scene where Konrad and Victor are fencing and having this intense conversation and I literally felt like I was hearing two people sparring words and saber instead of one person reading. He does such an amazing job of interpreting Oppel’s writing. He can work any emotion into his voice.

The actual plot of this book is pretty linear and basic, you have your typical Freudian trio; Victor’s the heady impulsive leader, his distant cousin Elizabeth is the logical, head on her shoulders girl, and their friend Henry is the cautious one who balances them out.The plot line is very structured and slow paced, so the narration by Luke Daniels just stole the show and elevated the story.

I didn’t really like Victor as a character and on some level I don’t think we are  supposed to. There were times when he was just petty, childish and selfish. I mean I get that he is only 16-years-old and a bit jealous of his brother, but some of the things he said and did made me hate his character.

An overall great book, I really can’t find any big faults with it, the audiobook is great and I am very curious to read the sequel, Such Wicked Intent which comes out on  next week on August 21st !

Side note: I just love the original cover by the way. I mean the new ones are okay, but the original one has so much mystery to it. It has this forbidden look, like we are seeing something we shouldn’t  and I think it captures the book perfectly. I think the news ones look a little too romantic.